No advanced martial artist will undermine the importance of the elbows. In addition to being a very solid striking weapon, the control of the elbows in offensive and defensive technique is paramount.

Let’s consider the simple straight punch. Beginners will often concentrate on the fist, aiming to project it at the target with maximum speed and power. However this approach will often lead to the elbow separating from the hip and wasting the power generated in the legs, hips and waist. It will also affect the trajectory of the punch. As the elbow separates from the hip, the punch curves and the point of impact shifts to an outer portion of the fist, which is not in line with the forearm bones. This endangers the smaller fingers and wrist.

A much more efficient and effective method of delivering power into a straight punch is to focus on projecting the elbow towards the target. The fist then penetrates the target in a straight line with strong structural integrity, as the forearm bones will be in natural alignment with the fist. Transfer your bodyweight at the same angle as the punch to maximise force and minimise the likelihood of damage to the fist.

Ideal ways to practice this motion is to concentrate on pushing from the elbows when doing push-ups, and to train on a makiwara (punching post). My own makiwara is an unforgiving jacaranda tree wrapped in rope, which is quick to remind me when my technique gets lazy.

Koryu Uchinadi Kenpo Jutsu’s (Classical Okinawan Karate) Tegumi drills are ideal ways to practice elbow control. Parry an opponent’s hand attack and enter with your whole body, using the forearm to apply weight to their upper arm, just above the elbow. Keep your forearm vertical, as this gives the greatest range of motion and control of the opponent. Once the elbow is controlled, you only have to walk toward the opponent maintaining elbow control to affect their balance and pre-emptively defend against hand strikes or kicks. For further demonstration of this concept, please come directly to Sobukan Martial Arts in Mitcham, SA!

Wing Chun, one of the more scientific of martial arts, offers the following maxims, amongst others:

– During sticky hand practice, the hand which has entered beyond the elbow will win nine times out of ten.

– The elbow must be strong. Then you can take on any attack.

The importance of relaxed elbows was impressed upon me at the Hakkoryu Jujutsu So-Honbu dojo in Saitama, Japan. When any muscular power is used, the elbows tighten and connect the movement of the hands to the balance of your entire body. A small pull or push of your arms will affect your entire body. If your elbows are completely relaxed, an opponent can yank and push your arms and it will have little effect on the rest of your body. Visualise a body made of wood versus one made of rope to better comprehend this principle. 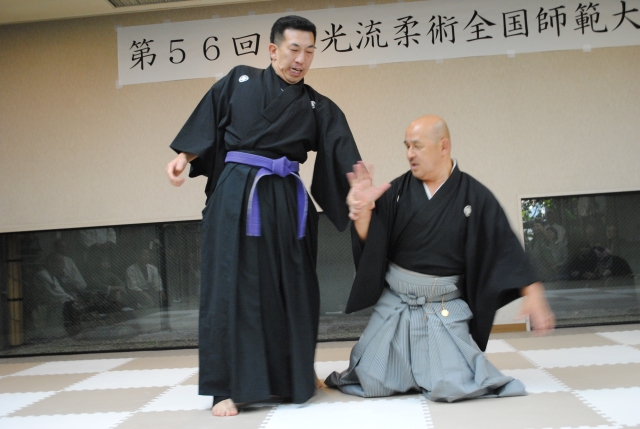 Some of the most common errors in Jujutsu are also due to employing strength in the elbow joints. Doing so changes the bio-mechanics of the arm, raising the shoulder affecting the angle of the technique and neutralising its effectiveness. Too often, the martial artist will then try to force the technique to work, further reducing its effectiveness and leaving them vulnerable to counter-attack.

Elbows need to be taken care of though. Apart from their likely exposure to arm-bars and arm-locks, I have recently been suffering from one tennis elbow and one golf elbow. They seem to be rather susceptible to over-use injury. Take care of them!

It is fair to say that the importance of proper understanding of the elbow joint is a universal principle that transcends style. If you are a beginning martial artist, please remember this lesson as you progress. If you are a black belt looking for the next level of development, it may lie in the elbows. Relax your elbows, and fire punches from them. Neutralise attacks at the opponent’s elbow and disrupt their balance at the same point. This will buy you time to consider your next move. And don’t forget the elbow is one of the four hardest points of the body. Striking will this rock hard point is sure to do plenty of damage to an attacker, while protecting our vulnerable hands. Elbows, what would we do without them?