Posted on September 1, 2013 by chrissensei

Welcome to new students Richard, Lucas, Marc, Kensei (Robert), Ben, Tarkan and Sarah! Thank you to all the children who attended the Child Safety lecture this month, which was run by three police officers and the judo club. It was a great way to help students relate their martial arts training to real life situations, such as bullying, kidnap and cyber-crimes.

This month we will celebrate the second anniversary of Sobukan, and October marks one year since we moved to our current dojo in Clarence Gardens. To celebrate, let’s gather on Saturday 5th October around 1pm at Himeji Gardens (near the corner of Hutt St on South Tce in the city) for a relaxing picnic and a chat and a bit of light training in the Japanese gardens. This will give us plenty of time between Saturday Jujutsu to collect our families and get ready. There will be awards for junior students who have put in extraordinary effort.

Coinciding with our anniversary, we have just received a delivery of Sobukan rash tops! Sizes are limited (big sizes are plentiful!), but available at the heavily subsidised price of $30. These are a trial, and if they go well we will look into ordering short sleeved rash tops, t-shirts and hoodies. Please order soon to avoid missing out on your size.

This month I will be joining as a member of Kudo and ordering two sets of Kudo headgear. This will allow interested parties to prepare for Kudo competition next year. Kudo was established in 1981 by Takashi Azuma, who was an All-Japan Kyokushinkai Full Contact Karate champion and Judo 3rd dan black belt. He established Kudo as he felt that the rules of Kyokushinkai, which does not allow throws and grappling, head punches, elbows and headbutts, was too limiting. Kudo headgear allows for a realistic and safe form of MMA sparring that is more closely aligned with self-defence than UFC-style MMA. I believe that this form of kumite will perfectly complement our Koryu Uchinadi Kenpo Jutsu kata and drills and help combine our striking, throws and grappling.
Web:        http://www.ku-do.com/eng/index.html
Youtube: http://www.youtube.com/watch?v=iqxwBNrum5c 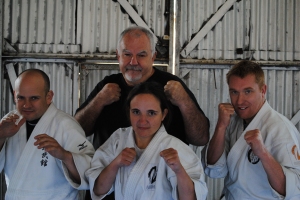 The world’s most foremost Karate researcher and historian, and the head of IRKRS and Koryu Uchinadi Kenpo Jutsu, Hanshi Patrick McCarthy will be visiting SA! Shawn Donaldson (Denshinkan) and Sobukan will host Hanshi McCarthy for the weekend of training. Hanshi is widely recognised as the world’s leading expert in kata and related practices. This is a rare chance to train with the best, and I hope that everyone will take advantage of this opportunity to take your martial arts to the next level. More information to follow soon. http://www.koryu-uchinadi.com/index1.html

We will have the next grading sometime in the not-too-distant future, probably in October or November. Please take control of your learning and ensure you enquire about any part of your syllabus that you are not confident with.

We have been invited to demonstrate Japanese martial arts at the OzAsia Moon Lantern Festival. This time I would love to do something special. This is a wonderful opportunity to develop and demonstrate your abilities to large groups of people and help promote both Japanese martial arts and your dojo. Demonstrations are fun events and a great chance to socialise with your dojo mates outside of regular training. Please RSVP ASAP to let me know if you will be able to assist in the demonstration. The OzAsia Moon Lantern Festival will be held on Thursday, 19th September 2013 at 3:40pm (yes, that’s right) in Elder Park. http://www.ozasiafestival.com.au/

AMAA (Karate)
The next AMAA competition is scheduled for 20 October, and includes events such as kata, complete sparring (striking to body, throws and grappling), triple event (one round each of striking to body, throws and grappling), and contact and non-contact sparring. This is now just around the corner! Please let me know if you are interested in competing in the future. http://australianmartialartsassociation.com/

七転八起 Nana korobi ya oki.
One of my favourite Japanese expressions (kotowaza) is ‘nana korobi ya oki’. Literally this means ‘seven falls, eight rises’, and encourages the subject to try again after each failure. No matter how many times you fail, you only need to succeed one. Keep going!

So where to start for the first technical lesson in the monthly newsletters? At the beginning, of course!

構え (kamae) refers to a ready position, a fighting stance, often known as a ‘fence’ or ‘guard’. There are many versions of kamae, with each variation designed to exploit your strengths, while mitigating those of the opponent or opponents. The kamae can be conveniently broken down into four parts: the legs, body, arms and head.

Legs: Stand up. Talk a walk around the room. Each of your steps should be roughly the same length and your feet will remain in line with your hips. This is the most natural stance for you to fight from. Each step should be roughly one hips width wide and about the same length, maybe slightly longer. Bend your knees a little and place your weight on your toes, letting your heels float off the ground. Your rear foot should feel springy, preparing to pounce or absorb impact at any moment.

Body: If fighting a single opponent in a combat sport, it is recommended to lean significantly forward. However, in a street confrontation, it is necessary to be prepared for surprise attacks from any angle. Stand straight and angle your body slightly, keeping your abdominal muscles taut and feeling power in your lower back. The core is the source of your power, and is the only part of your body that should feel slightly tense. Your weight should be very marginally forward, as it is easier to move both forward and backward quickly from this position. The Japanese say ‘気持ちだけ前へ’, which means to just feel or imagine that your weight is forward without deliberately shifting your weight.

Arms: Raise your hands until your thumbs can touch a couple of inches in front of your chin to protect your face. Your hand position will change depending on the height difference between your attacker and yourself, and your preferred attacking weapons. Open your hands with your palms outwards. This looks passive, rather than aggressive and is equally applicable during the negotiation and physical defence phases of the self-defence stages. Open hands are more dexterous to catch incoming attacks and more flexible in terms of attacking options.

Your elbows must be in front of your floating ribs, not out to the side. This is essential for a number of reasons:

Head: Lower your chin slightly to protect your jaw and throat. Look at your opponent’s throat, but keep your vision soft. Peripheral vision facilitates faster reactions, which is part of the survival mechanism of the animal world. Direct vision is perfect for predators, when completely focussed on attack without concern for protecting one’s self. Keep your eyes unfocussed, but be ready to hone in on the target when the opportunity arises.