Posted on November 7, 2013 by chrissensei

This has been another huge month! Congratulations to everyone who competed in the AMAA full contact martial arts competition on Sunday 20th October. Sobukan Martial Arts made a great impact with the most students and winning the most medals. Jo Purvis got called into fight with no preparation and still demolished her younger, heavier 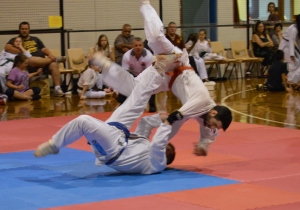 opponent! Despite injuring himself in a motorbike accident a week earlier, Raghu stepped onto the mats to face an opponent 20 kgs heavier than himself – and who was a black belt in judo with muay Thai and MMA experience – and drew! In fact, every competitor from Sobukan won a medal. I was extremely proud of the discipline, technique, spirit and conduct of our students.

Last month I wrote about my vision for Sobukan students and in particular for black belt candidates. I spoke about how each student will be proficient in all ranges of combat. While each student will possess core skills to escape, kick, punch, throw, clinch, choke, submit and arrest, I anticipate that each student will choose to specialise in their preferred area within the martial arts and natural leaders – or Subject Matter Experts (SMEs) in each system will emerge. Recently I have been trying to spend some time with some of these SMEs outside of the dojo to further develop our skills. 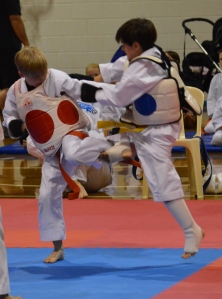 Some students have already demonstrated specialist skill in selected areas, such as Geoff and Julie’s proficiency and passion for kata and Koryu Uchinadi Kenpo Jutsu (KU)/karate drills. Daniel and Kynan are working hard to be SMEs in judo and jujutsu. Umehara san adds his knowledge of Japanese culture and has made great progress in Hakkoryu Jujutsu. Nick and Aaron have demonstrated great skills on the ground and in shooto (MMA) sparring. And then there are those who have demonstrated the commitment and ability to be future leaders in all arts – Raghu, Pacey, Chris, Jason, the Cernev brothers and many many more. We are blessed with depth of knowledge and talent.

The children have shown great potential leadership. Max and Dylan are great all-rounders and senior students. James Palmer has demonstrated great maturity and skill. Jayrell has great grappling, Ky has powerful throws. Tyzak has lightning fast strikes (as does his brother!). Ethan demonstrated great fighting skill last week. Hugo has amazing strength. Again, I could go on and on. Even the white belts have demonstrated great talent. I have great expectations for this little club of ours! I am very excited about our future together.

Recently we have been focussing on preparing our fighting team for the AMAA competition, the results of which you can find below. For the next few weeks we will concentrate on grading syllabus and working on aspects that have taken a back seat to the 3Cs (counters, combinations and conditioning) of competition training.

Earlier in the month, we celebrated our 2nd anniversary, and several people were presented with awards. These are always very difficult for me, as there are so many deserving candidates. However only a few awards are given to preserve the feeling that each one is carefully selected and recipients should be very proud. The awards are decided on the basis of several criteria: attendance, effort, improvement, attitude and all-round ability. For the first time, this year a senior student of the award was also presented. 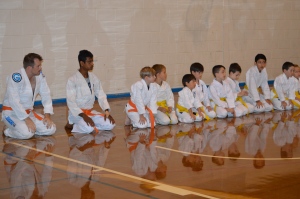 The anniversary itself was great fun, we were blessed with perfect weather and had loads of food and drink and of course very good company. We sat and chat, and had some games for the kids: a piñata and suikawari (blindfolded watermelon smashing), both of which the children (of all ages) demolished with a wooden sword.

The world’s most foremost Karate researcher and historian, and the head of IRKRS and Koryu Uchinadi Kenpo Jutsu, Hanshi Patrick McCarthy will be visiting SA on November 16 and 17! Shawn Donaldson (Denshinkan) and Sobukan will host Hanshi McCarthy for the weekend of training – for adult students only. Hanshi is widely recognised as the world’s leading expert in kata and related karate practices. He is responsible for developing approximately half of the drills in our syllabus! This is a rare chance to train with the best, please do whatever you can to ensure you will be there!! http://www.koryu-uchinadi.com/index1.html 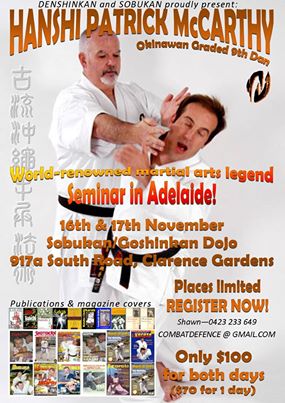 November classes will focus on grading criteria, but please take control of your learning and ensure you enquire about any part of your syllabus that you are not confident with. Rather than aim for perfection before testing for your next belt, I would much prefer that you challenge yourself – never fear failure! With your new belt, you will still have plenty of opportunity to continue to develop the more basic drills (everyone does tegumi!), but passing the test unlocks the next level of learning. Learning is never linear. You start with a steep learning curve that will naturally plateau. Our syllabus (and regular gradings) ensures that your learning pattern will be a succession of small steep curves rather than one long line. I strongly believe that this assists development, motivation and momentum.

Encouragement award:
Sei Gillies
Some medal winners had to leave early. Thank you to Jhett Morris for collecting the medals on behalf of the winners.

This is very timely as this kotowaza is one of the catch-phrases used in the International Ryukyu Karate Jutsu Research Society (IRKRS) headed by Hanshi Patrick McCarthy, whom we have the honour of hosting in a few weeks. Following is the IRKRS interpretation of this kotowaza:

If your jab is the lightening, then your cross punch is the thunder!

The cross punch (or gyakutsuki) should be fast, direct and use the entire body to achieve momentum in one well-timed kinetic chain. Assuming a left food forward fighting stance, the right hand punches. The target is often the jaw, throat or body. Here is how to do it correctly: